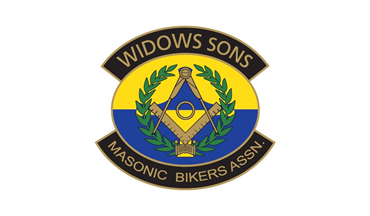 Great promotional day being asked to have a presence at the AGM of Provincial Grand Lodge of Durham.

John Stevenson, Ken Cook & Trevor Harbottle set up the stand in the foyer of The Federation in Dunston and welcomed Masons as the entered the building.

Great interest was shown in our Masonic Bikers Association and we may have a few potential members. 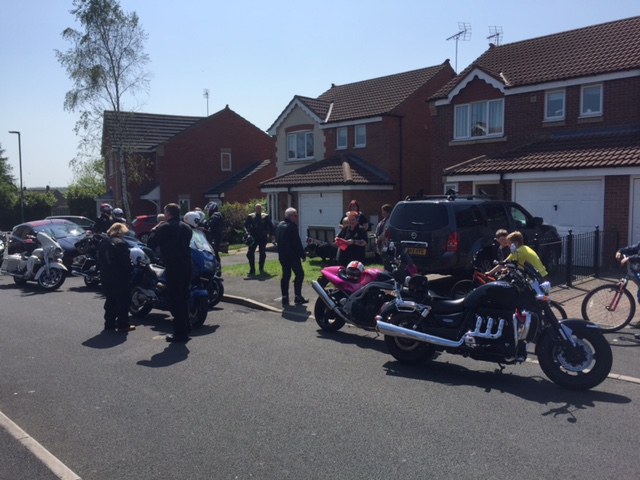 Eighteen of us on fourteen bikes met at Bowburn services on the A1 for coffee on a glorious morning.

We then set off for lunch at The High Force Hotel with a slight de-tour to pick up Andy & Pam from Willington.

The route, which took us through Weardale and Teesdale, was planned by Graham Dockrill who had certainly done some “homework” as the roads were great for biking and mainly free from traffic.

During lunch we had a very relaxed GP meeting and discussed some upcoming events.

It was the warmest day of the year so-far and a great day was had by all.

First social “RideOut” of the season

After two Easter Egg Runs we thought it was a good idea to have our first social RideOut of the year – Destination Seahouses on the North East coast.

Durham Chapter members met at Washington then rode up to meet members of Northumberland Chapter just north of Newcastle.

In all 24 of us then set off, taking the coastal route to Warkworth for a coffee break.

We then headed further up the coast to Seahouses where we enjoyed Fish & Chips overlooking Seahouses Harbour (main pic).

After lunch we then headed to Alnmouth where icecream was the final calorie overload of the day.

Being the warmest day of the year so far added to a really great day, made even better by the number of members that came along “for the ride”! 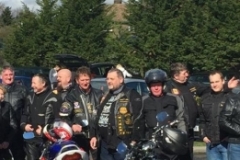 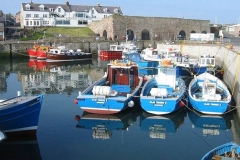 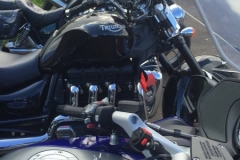 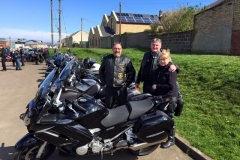 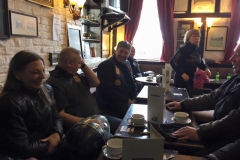 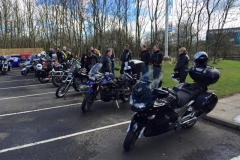 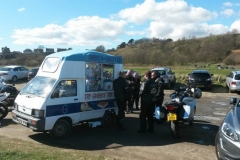 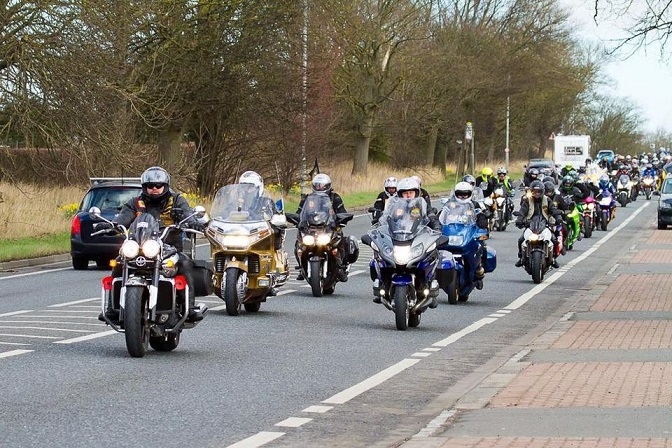 It was an absolute privilege for the Durham Chapter of The Widows Sons to be invited by Bro Tony Hudspith (Organiser of The Durham Bikers Easter Egg Run ) to lead their annual run from Durham to Darlington Hospital then back to Durham University Hospital to deliver Easter Eggs to the Childrens Wards.

Our Ride Warden, Andy “Hoggy” Bridger, with Masonic and County Flags flying, set off infront of our President, Trevor Harbottle and Mike Ewart, President of Northumberland Chapter, immediately followed by a dozen Widows Sons who turned out on this quite chilly and windy Easter Sunday, to lead the way for bikers from all over the North East.

In all, over 900 bikers followed us for this 20 mile trip from Durham to Darlington.

People were lined up along the route to cheer us on and seeing so many bikers waving and interacting with the crowds along the way was quite a spectacle.

After delivering Eggs to the Childrens Ward at Darlington we then returned to Durham where, after visiting the Childrens Ward we had a special request from some nurses, to visit a young man, who because of a recent operation couldnt quite make it outside to see all the bikes – We thought “two” Easter Eggs might make his recovery a little more speedy !

In all, a fantastic occasion and such an honour to be able to show the true spirit of Freemasonry combining with the good will of so many motorcyclists. 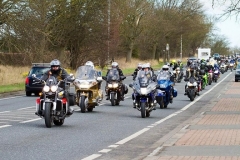 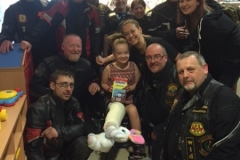 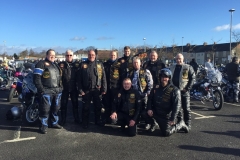 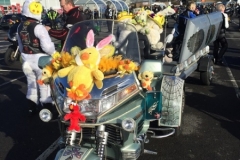 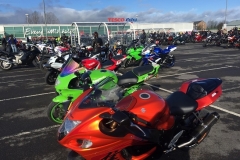 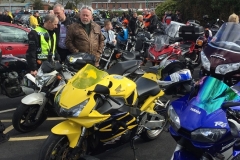 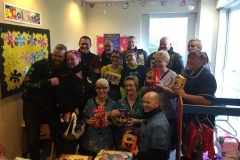 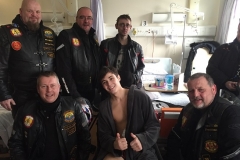 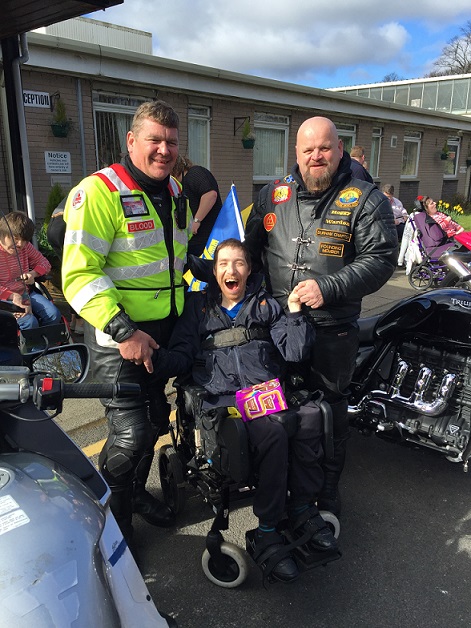 Once again & with great thanks, Durham Chapter were invited to accompany Northumberland Chapter on their annual Easter Egg Run – Widows Sons from Yorkshire and Cumbria & Northumbria Blood Bikes were also represented.

The day started with coffee and bacon sandwiches at The Northumbrian Piper. 33 bikes then rode to our first stop – The Wellford Centre, a day care centre for users with a variety of disabilities including learning and mobility difficulties. We were very warmly received and after handing out Easter Eggs we lifted some pupils out of their wheelchairs and sat them on our bikes whilst others thought it was a fantastic photo oportunity.

The Percy Headly Foundation was our next visit. The children here are prodimently deaf so sitting on the bikes and reving the engines, to the limit !, gave them a great sensation and their faces lit up as they could feel the vibrations, especially on the “Noisier” bikes !

At lunchtime a collection raised over £200 and was donated to the Blood Bikes and we were shown one of the bikes wich was paid for and donated by the Mark Masons Benevolent Fund – a great acheivement.

After lunch we visited the Talbot Centre in the West of Newcastle who provide education and support to children with integration issues.

The last stop was to The Cat & Dog shelter to deliver a blankets, food & a donation of £250. 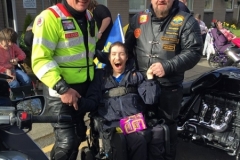 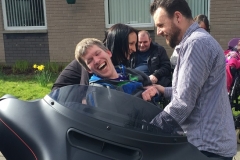 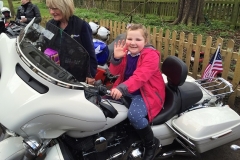 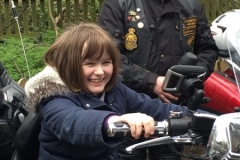 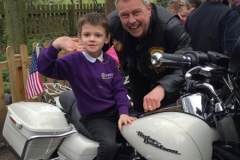 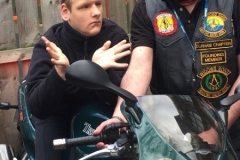 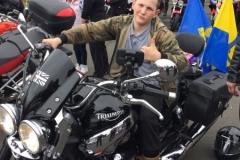 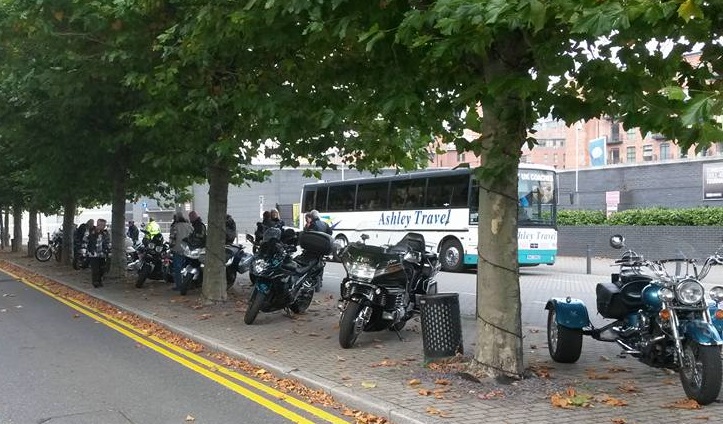 Widows Sons from Durham, Northumberland and Cumbria met at Durham Services then rode via Wetherby to The Royal Armouries in Leeds (Without getting lost!)

The Royal Armouries is The UK’s national museum or arms and armour, including artillery.

We spent a couple of hours wandering around the museum seeing some fantastic displays and exhbits.

After lunch we then rode to Squires Cafe for a quick coffee, along with about another 500 bikers!

Unusually for October the sun shone all day and everyone had a great day out.